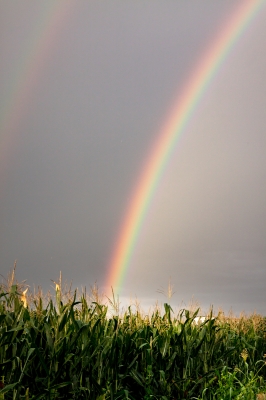 Have you ever been out, just after a rain storm, at just the perfect moment–and saw the most beautiful rainbow? Well, April 3rd was “Find a Rainbow” day! Who knew? I love rainbows, and most recently, while we were in the Bay Area visiting for Easter, we were heading out for an early morning hike and it had rained the night before. Heading out to the car, we saw the most spectacular double order rainbow!

A rainbow is an optical and meteorological phenomenon that is caused by reflection of light in water droplets in the Earth’s atmosphere, resulting in a spectrum of light appearing in the sky. It takes the form of a multicoloured arc.

And further defines a primary and double rainbow as follows:

In a “primary rainbow“, the arc shows red on the outer part and violet on the inner side. This rainbow is caused by light being refracted while entering a droplet of water, then reflected inside on the back of the droplet and refracted again when leaving it.

In a double rainbow, a second arc is seen outside the primary arc, and has the order of its colours reversed, red facing toward the other one, in both rainbows. This second rainbow is caused by light reflecting twice inside water droplets.