As June is the month that we dedicate to celebrating fathers, I thought it appropriate to share my gratitude that I have an awesome dad, whom I call “Pops.” I’m also fortunate to have a wonderful father-in-law, whom we call “Poppa Joe.” 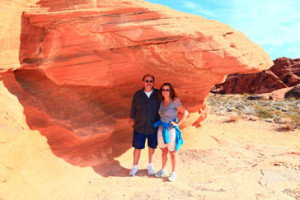 My dad and I in the Valley of Fire, Nevada in November 2013

My dad and I have always been close. When I was a kid and we had to have a serious conversation about something, we’d have an “ice cream talk.” It was like somehow, the ice cream made it easier to broach a difficult topic. When I turned 21 and could order a beer at a bar, we turned “ice cream talks” into “beer talks.” LOL And now that I have been diagnosed with a vocal disorder for the past year and four months, we have now resorted to a Skype chat where he talks and I type…he has a beer and I have a glass of wine and we have a toast. It’s something special and unique that we both look forward to once or twice a week together.

My dad shared with me that he wanted to do things with me that his dad didn’t do with him as a kid…so for example, growing up I was more into sports than shopping. When I met my husband though, he wasn’t much into sports, so he didn’t care how much I knew about baseball or football or anything else sports-related. He also appreciates that I’m not much of a shopper! And speaking of meeting my husband…I was also my dad’s only child, and being a girl, well, let’s just say dating was a bit of a challenge. 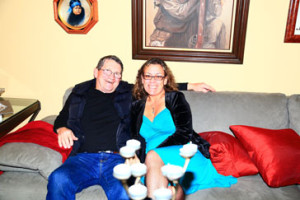 My father-in-law Joe and I at Christmas dinner 2013

Shortly after we started dating, Jason brought me to his parents house to meet his mom and dad. Little did we know, his mom was having a wine party with her girlfriends from the neighborhood that evening. They invited us in with hugs and welcomes and I was immediately given a glass of wine, which I was very careful to monitor. Jason’s mom and her friends took turns asking me questions and getting to know me. About an hour later Jason’s dad came home from work and apparently saw a fun opportunity at hand. 🙂 He sat down at the table with us and every time I would turn my head to chat with one of the ladies at the table, he would fill up my wine a little bit. Mind you, I had a death grip on the stem of my glass and I thought I was doing REALLY well, taking only tiny sips intermittently every so often…well after a few more hours of visiting I was really feeling the effects of his antics! We were supposed to go out with some of Jason’s friends that night and that pretty much wasn’t happening for me given my ‘condition.’

I woke up the next morning feeling pretty mortified. Jason assured me that his parents thought highly of me and that Jason’s dad even pulled him aside and say “Son, she’s the one, seal the deal! Seal the deal!” LOL…and that’s how I met my father-in-law about 12 years ago. 🙂

I love my dad and my father-in-law and I am blessed to be close to both of them!