Note Of Your Surroundings

Your Friendly Hise Hikers Tuesday Tip: Be Mindful Of Your Surroundings. 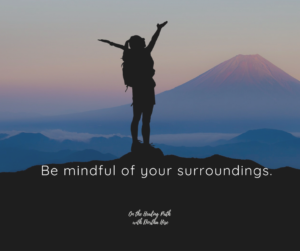 A few years ago on a section hike on the Pacific Crest Trail, we were cruising along and started seeing some signs of what definitely looked like mining activity in the vicinity.

Sure enough, like 20 minutes later, as we are approaching a ridge, these two people come racing up in their golf cart. Initially, we were like “what the heck?” because, you know, we were definitely in the middle of nowhere and at least 10-15 miles from civilization – haha – and one of the people had a firearm holstered on their hip.

We chatted with them for a little bit and learned they had a gold mine claim nearby and used this ridge to make calls and send texts (they affectionately referred to it as Cell Phone Ridge – haha) and that’s why they were there.

After we parted ways with them, everyone in our group agreed that it certainly felt like we were being checked out for our intentions. I mean, as if the ‘three-day trail funk’ on us said anything but “we’re hiking a portion of the PCT… hahaha

Anyway, if we hadn’t paid attention to our surroundings, this encounter might have gone differently.