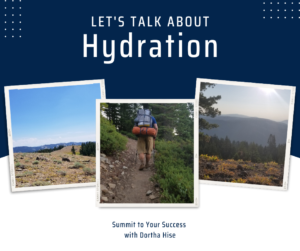 In any endurance sport, the importance of hydration cannot be underestimated.

About 3 years ago, we completed a 50-mile section of the PCT that traversed a 3,000-foot descent down to a river, followed by a monster 3,000-foot ascent… oh, and it was the heat of the day… and it was hot as shit. I think our mileage that day was somewhere close to 20 miles, too.

We had been drinking plenty of water and at lunch, I chose to take a salt tablet (buffered electrolyte salts to be specific). Jason said he was ok and declined one at that time.

We finally made our way into camp pretty late in the day and our friend who had gone ahead of us had secured a camp spot for us (for which we were SO very grateful).

We started to set up and Jason was feeling pretty tired from that last push, so we agreed he would take a rest and I would start setting up our tent (another nice thing about hiking with your partner).

I got the tent set up and he climbed in to continue resting, while I turned to boil water for our meals.

Almost immediately, he started cramping up… like God-awful cramping. The type where he later shared, he thought he would wind up with Charley horses they were so brutal.

These were the kind of cramps that caused him to yell out in pain… like ungodly awfulness. I cringe as I sit remembering the incident. And it made my guts hurt when I looked at the photos from the trip when I was creating the image for this post.

Knowing that our meals had plenty of salt included in them, I knew it would help – and I pressed for him to also take a salt tablet.

Initially, he was reluctant… then he was like “ok, I’ll take one.”

In the meantime, I ran up to our friend’s tent (who has back country medical training) and asked if there was anything else I could do. I shared I had just given him salt and we had our dinners to eat, which also had salt. She said there wasn’t much else she could think of to do.

We ate dinner and he continued hydrating through the evening and morning before we took off for our last day.

And man oh man what a lesson in the importance of electrolytes and hydration this adventure served.

Jason is an avid supporter and believer in using the buffered electrolyte salt tablets now.

The ones we take include sodium, potassium, calcium, magnesium, and vitamin D. All to help with the effects of heat stress and muscle cramping due to sweating.

Anyway, all of this to say – be sure not to just drink water – also to include electrolytes to replace the ones lost during perspiration.